8/8/2017 Hungary – Nyírbátor to Târnăveni
Getting up at 7:00 is not exactly an early start, but half an hour later I am already on my way. After Romanian border I meet first bigger Romanian town, Carei. I stop to withdraw some cash, get some ice cream and continue towards Zalau. The traffic is madness, sometimes there is decent 30-50 cm space behind the line, but one has to be careful, because always the road crosses some little stream it narrows down and I am forced left, hoping no car or lorry hits me. In Zalau is really hot and I guess it will be even worse as I am heading south. Petrol station, some coconut water, coffee and another ice cream. Whole day I was passing countryside and thinking about always present dogs. So far they are friendly. Almost everyone sells some real bio vegetable and fruit next to the road, this is perfect, especially in this heat. I pass almost whole city of Cluj, suddenly stopped next to Shanghai restaurant as this really unexpected situation happened. Some guy approached me and said: “Could I offer you some lemonade or a glass of water?” I was already thinking about visiting this restaurant for some proper meal, associating it´s name with a busy traffic and thinking if it is also so busy in China. “I am actually thinking about going in, do you know the restaurant?” I replied. “I think people like it here.” he said and I started to be suspicious who he might be. “Are you the owner?” “No, I am just administrator, he is the owner.” and pointed towards the sky. In next 10 minutes I agreed to come in, it was not really possible to refuse any more. He walked me to the most further table, as I pointed out to him, that my presence might discourage some guests and therefore I would like something more private. I was offered even a shower (kindly refused), got my own waiter and talked with this humble man while eating my delicious beef with rice and telling him, what I was doing there and how my days look like. Even met his son, who was proudly helping serve the meals. After the best coffee I had on the whole journey we say goodbye and I continue into the darkness. The city has changed, decent people disappeared and underworld took over. Time to get out. I planned for Transfagarashan highway in the morning, but just 90 km I can not bare the stress of dogs who chased me through every village. Time for another power nap. It is quite warm and I park above some village around 4 a.m. just sitting on the ground, holding my bike I fall in very shallow sleep. In the morning two dogs came over and started to bark at me, but I don´t care about as much as I would normally fear them if not tired. My tactics worked, they gave up and I got some more sleep.

9/8/2017 Romania – Târnăveni to Căpățânenii Ungureni
Ok, now it starts to be clear to me, that I am not making it in Greece for afterparty, however I can still enjoy some cycling and nice views as I will pass Fagarash mountain range and still have to cycle through Bulgaria, Serbia, Macedonia and Greece. Round noon I reach petrol station under the mountains, nothing to eat, not even 7 days croissants, just some crisps and juice. Well, previous races learned me how to survive on this. It is pretty warm, lets get this done and look forward to some downhill. I am not enjoying the climb at all, but I keep going as I know it is the only way, how to get up. The view is worth it.
Close to the top one of the organizers is waving at me and cheering, final meters are done, I ride through the tunnel and down to closed checkpoint. There I decided to have a beer, dinner and coffee, but I was regretting this decision as it takes ages and I lost precious daylight. On the way down is also a few little tricky climbs and almost by the dam I meet some Romanian girl on her bike, without lights. I gave her some of mine and continued with her down the road to her car, where I said her goodbye and went off to look for some hotel. I wanted to have a proper sleep after this night. And a shower. Last time I had one was in Slovakia at CP3.

10/8/2017 Romania – Căpățânenii Ungureni to Vidin
Last checkpoint done, now it is just a run for finish line. In the morning I had to fix my tire, as the side got broken in Austria and I haven´t either noticed or it was not so bad. Now there was a little bubble as the pressurized inner tube tried to find her way through the tire.
In the evening I have bought two new tires as I was passing Craiova, last big town in Romania.
Around midnight I crossed the Donau for a second time on this trip and entered Bulgaria. Some local guys gave me advice where to find a cheap accommodation and even negotiated better price for me. I payed their soups, but they insisted to give me some Levs. I didn´t really need a bed, just a shower. 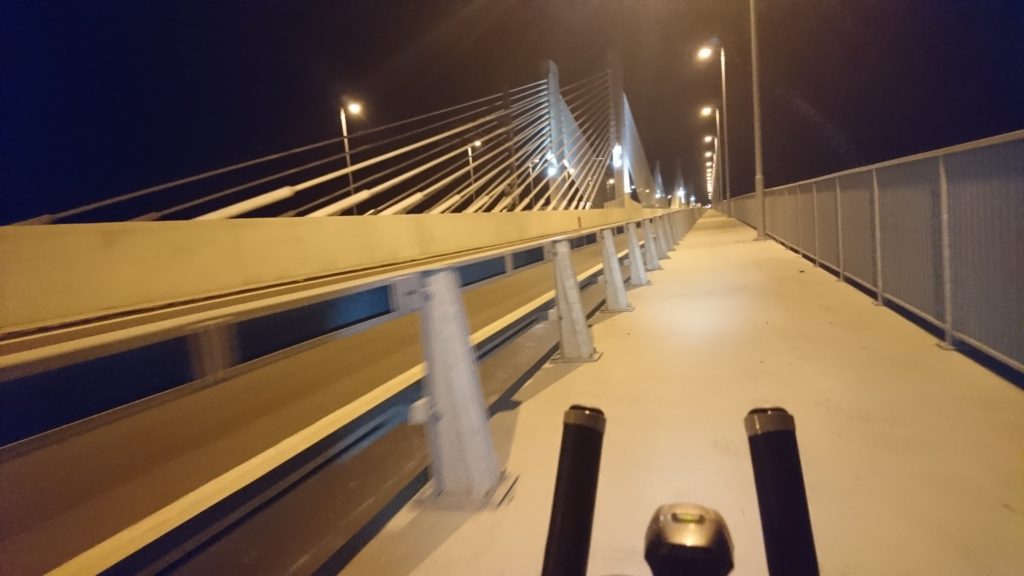 One thought on “Transcontinental race No5 – 4/5”