3/8/2017 Austia – Spilimbergo to Teufenbach
Ding dong! Ding dong! What? Where am I? Oh, sleeping by the church somewhere. Where? Italy. Still. What time is it? 6 a.m. time to get up and get going. I pass nice lake and start to climb to Austria, it is getting warmer. I know it here, as I was trying to go to Mt. Grappa in March, but two very cold nights send me back home to Vienna just before Ponteba.

In early spring on Alpe Adria, salamanders take over.

Pass to Austria, Villach and now it will be just a bike road to Semmering. There is a huge blank spot on my garmin map. Never mind, I know it here good. Next to Ossiacher lake my shifting wire snaps. Didn´t change them before the race, how often do you break a shifting cable, never, right? Service still open, that was lucky. Lets go further. Climbing to Mariahof just to find another closed road to Teufenbach. Phone battery flat, gps shows, that I am somewhere in the middle of that blank space. Great. Just before going down another valley I spot a little drawing, a map, but rivers show quite clearly where should I go, cool, but I wasted time instead of cycling, again. Found a shrine, hmm, this places start to make a napping effect on me.

4/8/2017 Austria – Teufenbach to Berg
Waking up by much pleasant music far too late, like in a fairy tale on a bank next to this shrine with Maria and her little carpenter. If nothing, I can at least pack my stuff fast and get on going in 10 minutes. Behind Judenburg I bump into a curb looking for food and not paying attention. Dented rim, torn tire, wheel not true anymore. Another day, another service instead of lunch. But I got that fixed pretty quickly. Going to Semmering, storm is coming. Resting in a bus stop, giving it 15 minutes to decide if it will rain or not. Quite heavy shower holds me there for another 2 hours, I don´t care as long as I can snooze. Almost midnight, rain seems to be also weakening. I start to put on overshoes and raining coat, knowing what comes next and not looking forward to it. Semmering, lightnings everywhere and thunders letting me know it is not far. Car works as a Faraday`s cage, does the bike works the same way? Wiener Neustadt and one of my favorite restaurants, OMV. Today I need to get to the border. At three I pass Zygmunt, nice too see a him again. Short sleep on a bank in Berg.

5/8/2017 Slovakia – Berg to Slovenská Lupča
Bratislava in the morning, definitely a hottest day so far. Busy road, but nice tarmac and decent space on the side. It rolls well. Nitra, Bánká Bystrica in the evening hours. Train stop, railwayman is nice, even offers a waiting room. „That is very kind, but I rather sleep outside.“ because I stink worse than a homeless dog. Tomorrow CP 3. 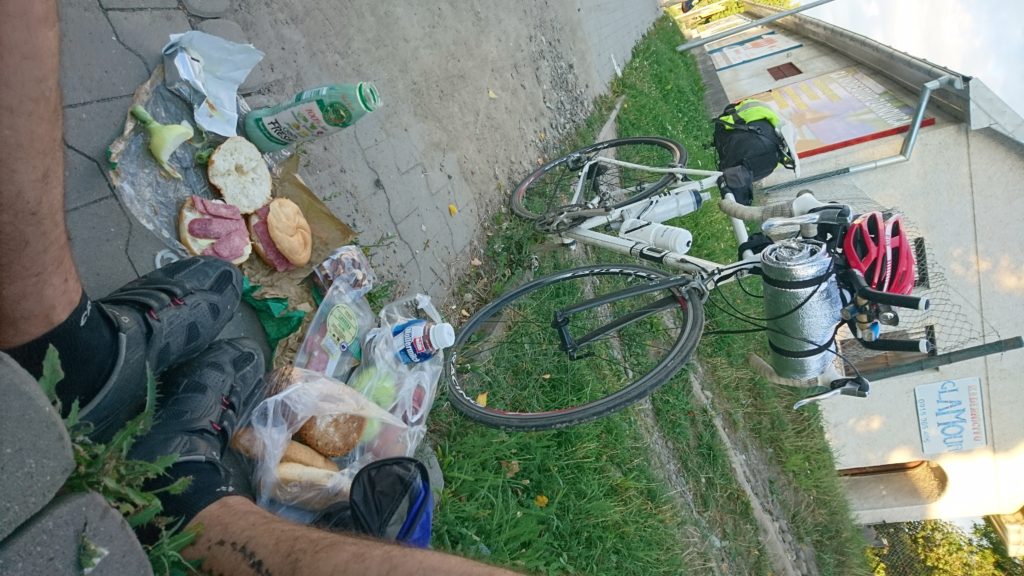 6/8/2017 Slovakia – Slovenská Lupča to Spišská Nová Ves
Climbing to Čertovica over Lower Tatra Mountains, another navigation mistake by going longer way, but beautiful views, I have some time, so what?

Just under the parcour I find out, that my stage didn´t ended at CP3 but under the parcour and that I don´t have 2,5 hours but only 1,5 hour left. Managed to get to CP at Sliezsky dom with 40 minutes to spare. Long break cleaning myself and my clothes, waiting for clothes to come out of the hotel´s dryer. Stuffing my face with soup, 2 meals and a desert. It is cloudy, but I should go further. In Spišská Nová Ves my morale is low, got wet on the way there, no place in a hotel, luckily found a shed/pub terrace next to a zoo.

7/8/2017 Slovakia – Spišská Nová Ves – train station somewhere in Hungary
Two hobos came a around 5 a.m. Drying their sleeping bags, trying to talk to me, I am to tired to answer, At 6 I get up and we have a chat about what I do there. „There is a lot of gypsies walking this path every day, you know? You are lucky you didn´t got mugged.“ „Yes, I can imagine, apparently they don´t go out when it rains.“
Going in the rain whole morning, just next to Košice I can not bare the frozen fingers and toes any more. Pub just next to read, I stopped shaking after 3rd tea and than drank just another three. I carry on to Košice, almost hitting a highway, got out of the city. I will not plan my routes over big towns any more, not to mention cities. Nice back wind took me to Hungary, where I met George, had a fun with his new garments, as he dressed t-shirt and a shorts instead of his lost leg warmers. Wanted to pull whole night, but decided to have one of my power naps. Shit.

One thought on “Transcontinental race No5 – 3/5”